So what do you do after working hard on the house for eight days straight, and the weather is very good? Well, you find a nearby foodtruck festival and go there!

As usual, we did a tour of all the offerings before we dug in. Instead of paying at the trucks themselves like we did with previous festivals, we had to buy ‘coins’ at a central spot. These coins turned out to be plastic chits that came stuck together in ‘mats’. You could also break them in half, because some of the things on offer cost 2,5 coins etcetera. Those coins didn’t seem to be re-used, which irked me. Drinks were served in plastic Coca Cola cups that proudly proclaimed that they were made with 40% recycled material — that weren’t re-used either. I really didn’t like that aspect of the festival. 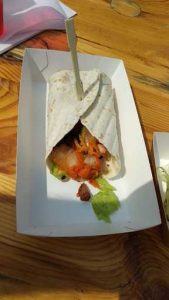 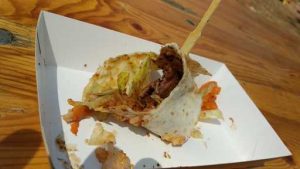 Our first food was ‘Korean soul food’: a Beef Bolgogi wrap. We selected ‘medium spicy’, which was right for us. I enjoyed the slightly sweet marinaded beef and the slightly sour and spicy taste of the home-made kimchi. 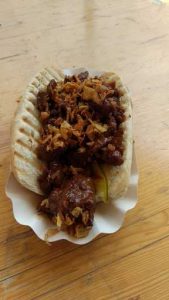 Second course was an Indonesian chicken satay sandwich. There was not much sauce to go with it, which was fine: often this is just a greasy blob anyway, so we didn’t miss it. We added some ketjap sambal and fried onions. The meat was so, so soft! Delicious. 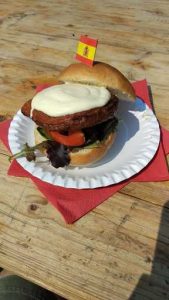 A Spanish burger. The patty was freshly grilled on a large charcoal grill, with some chorizo on top. The sauce was made with orange, which made for an interesting combination. 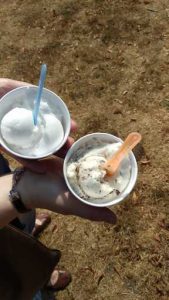 We had to wait for that burger in the full sun, so we were getting a tad warm. We decided to get some ice cream (lemon sherbert for klik, straciatella cream for me) to enjoy on a park bench under the linden in the park. 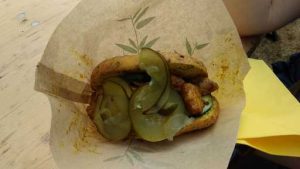 Chicken massala in a bun made of spiced dough, from the Surinam kitchen. We topped it off with some cucumber pickles. Again, the meat was so soft and tender it almost melted in your mouth. The spices in the bread really added another layer of flavour. 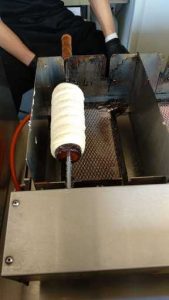 A “chimney cake”. I had never heard of it, and thought it would be like baumkuchen. Here’s ours being baked. 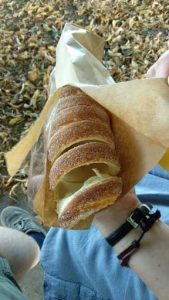 We had it dipped in cinnamon sugar — apparently the most popular choice. 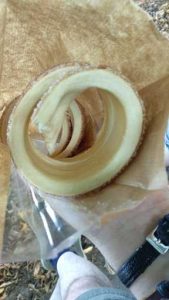 The roasted dough is crunchy on the outside, but really soft on the inside. And since it’s been turned around the ‘chimney pipe’ (or in this case, a wooden stick), it spirals around, which makes it easy to eat. But it was a lot, and it was good we shared!

After that, we got a last drink before returning home, our coins gone and our bellies full.