So I sent the photos of our haul at the foodtruck festival to my parents, and they were making appreciative noises at how good the food looked. So I checked their agenda, and I saw that the same festival was taking place in Eindhoven, near my parents, this weekend. So we invited them to check it out!
This Sunday was (and had been predicted to be) very hot: more than 30 degrees, and it would be held on an open field — so we were doubtful if we’d be comfortable enough. We decided to go anyway, and if one of us wanted to go, we’d just pack up and leave right away. We also went early on the day: the festival opened at 14:00 on Sunday, and we were there at 15:00. There was ample space, and we even managed to find a table and some (rickety) chairs with a little corner of shade — and as the sun rotated, all of us ended up sitting in the shade!
We started out with a tour of the site, to see what was on offer. About 50% of the trucks were also at the festival in Nijmegen, so there were some new options for us too. 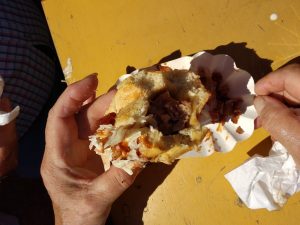 My parents started out by sharing a ‘hotdog’ from the chorizo place where I got my starting hotdog in Nijmegen too — but they went for the less spicy option! 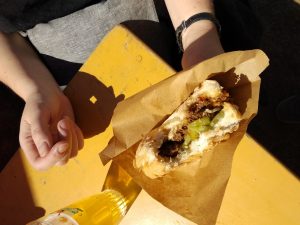 We started out by sharing a rendang sandwich. The bread was lightly toasted, which added a really nice crunch to the Indonesian beef stew. 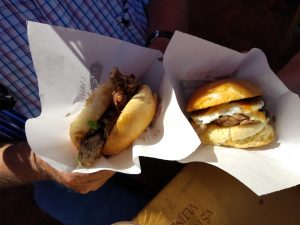 Next round, we got duck confit on a hamburger bun. On the left the blue cheese variant (for my dad) and to the right the goat’s cheese variant that me and klik shared. We had this last year, and it was still as good as we remembered. 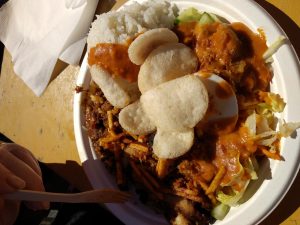 Meanwhile, my mom had been to the same Indonesian place to get a taster plate. She got extra because she got her food late because of a screw-up on their side. When I was there, I too noticed that they didn’t have their ordering process in order… But the food was very good — but since it was a large plate, my mom didn’t get to eat a lot after all that, even though we shared, and we didn’t touch the rice! 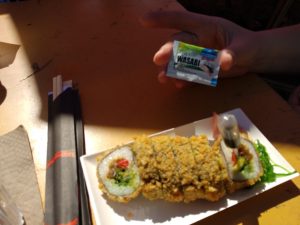 Me and klik shared a ‘crispy sushi’ roll. Came with a packet of wasabi paste and a pipette of soy sauce. The sushi itself was very mediocre, but the crunchy layer added a nice touch to it. 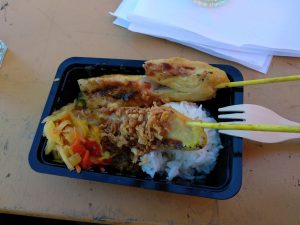 After sitting around for a bit, watching the people and having a few drinks, I went to get a serving of Thai-style satay. The meat was so tender! Really delicious, and I appreciated the pickles after all that bread and meat… 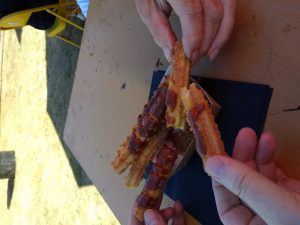 By then we were quite full, but we did get a portion of churros with caramel sauce to share!

We were back at their house at 17:30, and enjoyed coffee and tea before heading back home. Everyone had a great time, and it definitely wasn’t too hot. We’ll take them again next year — and next weekend, we’re taking klik’s mother to a foodtruck festival near her! I had to promise my mom to send photos of the things we eat there!