On the depiction of female Twi’leks

So one of my friends was inspired by The Last Jedi to play through Star Wars: Knights of the Old Republic II. He’s streaming his sessions, so we’ve been (sort-of) following along. And the discussions about the Jedi morality and such inspired him to organise a scenario for the Star Wars RPG (the current iteration by Fantasy Flight Games). We’ve played with him before: he did a game for us that was set at the beginning days of the Rebellion.
This game would be set roughly in the timeline of SW:KotOR2, about a 1000 years before the events in The Phantom Menace. And where we were restricted to the professions in the Age of Rebellion sourcebook in the previous game, for this game we were allowed to pick from all three sourcebooks — and that includes Jedi characters!
I wanted to play a Jedi, and I came up with Chunlade, a young female Twi’lek Jedi Seeker — with the Ataru Striker specialisation, which means her style of lightsaber combat is one of relentless attacks, using athletics like leaps and somersaults to close the distance. It’s the style that Yoda preferred. Twi’leks are the aliens with the two ‘tentacles’ on their head — I think the first time we see them is as the slave girl dancing for Jabba the Hutt.

The GM wanted to make a cool “title page” for our game, using concept art for our characters. But it turned out to be quite hard to find a depiction of a female Twi’lek that’s not all boobs, thighs and exposed midriffs. Not something a Jedi explorer would wear — and certainly not how I’d want to play a character. I guess that initial impression of Twi’lek’s as female, exotic, submissive and accessible has left its echos in the way they are depicted. Meh.
But after some extra searching we did manage to find the right concept art! 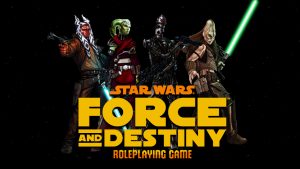