So of course I had to test out the molecular cooking kit! I decided to go for the chocolate spaghetti, to make a dessert for four, to be served at the new year’s eve festivities at our home.
I followed the recipe in the video I linked to in my previous entry. I had some reservations on just throwing chocolate into hot water: the two don’t mix, and chocolate ‘seizes up’ when it comes into contact with water. But whether it was because of the agar-agar that had already been dissolved into the water or because white chocolate is not ‘proper’ chocolate and thus has a different composition I do not know — but it worked out nicely. We are lacking in coconut liqueur, so I substituted Drambuie for that. 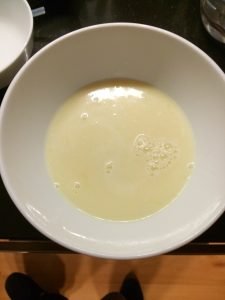 Then you have to suck up the warm liquid into the syringe, attach one silicon tube, squeeze, put into a bath of cold water, and repeat with the second and third tube. The kit came with only three tubes, so you can do only three ‘strands’ at a time, and each ‘batch’ (if you can call it that) takes three minutes… 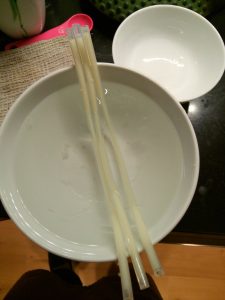 The three tubes in the bath of cold water. 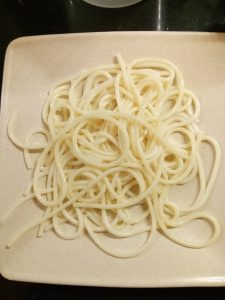 In the end, this is (part of) a single portion. It took about an hour, and you had to be in the kitchen every three minutes! It looks cool though, but because there is a lot of water added to support the agar-agar, the taste of whatever you’re using is diluted too! And white chocolate doesn’t have a strong taste of itself to begin with… In part this should have been compensated by the booze, but that was only partially. Next time, I think I’d add a generous splurge of vanilla extract or something like that to give the otherwise bland taste a bit of a kick.

With that first batch done, we got some more white chocolate and did three batches in one go. This took us the better part of a day! Of course, if you have more tubes (and we will look into getting more!) you can do bigger batches. But we didn’t have such narrow tubes of food-grade(!) silicon lying around…
Because the going is so slow, the liquid will also cool and solidify. This can, of course, be easily remedied by cooking it up again: agar-agar is solid when cool, but liquid when heated. 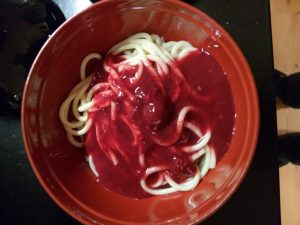 Of course, this spaghetti should come with a red sauce! We cooked up a batch of “summer fruits” and ran that through the blender. The slight sour note of the fruit complements the taste of the white chocolate quite nicely. 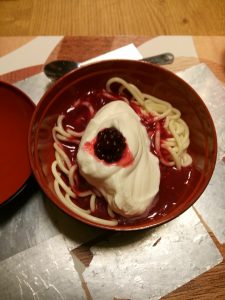 We served individual portions in lacquerware Japanese-style soup bowls, with whipped cream and a blackberry on top!

I’m really pleased with the end result, but it’s too much work to do casually. And the tastes have to be improved too. Still, fun to do, and I’m sure we’ll experiment with this again!