Seven months ago, we released version 5.1 of our software. I can’t recall how we came to it, but I ended up treating the team to home-baked macarons. That was so popular that a tradition was born.
Monday evening, we released version 5.1.1, so that evening we were very busy baking up two batches of macarons so I could bring them to the office the next day. This worked out especially well because two colleagues who have been away on sick leave for a longer time had announced that they would swing by the office for a little while that day — so I could give them the macarons as well! 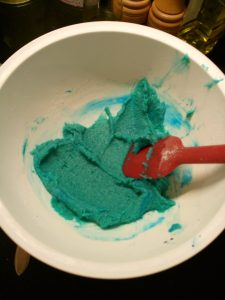 Sift 100 gr of almond flour and 100 gr of icing sugar in a bowl, and add 40 gr of egg white. Mix it all up, and add your colouring. If you have liquid food colouring, don’t add too much, I often do just eight drops, and that’s enough. Hundreds of smurfs died for this dough! 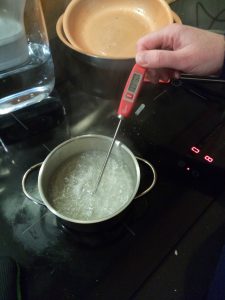 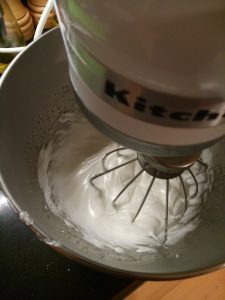 Add it to 40 gr of egg white that you have beaten into a really fluffy mass. Basically, setting 10 on a Kitchenaid for as long as you’re cooking the syrup. Lower the setting of your kitchen machine and add the syrup in a small trickle. The heat of the syrup will cook the egg whites.

Now you gotta add the cooked fluffy egg whites to the almond dough. The way I go about it is to take a big scoop and just mix it through the dough rigorously. That will break up the egg white a bit, but will make the dough just a tad more fluffy so that it is easier to mix the rest in. 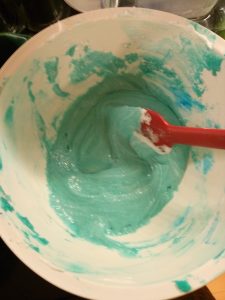 The cooked egg whites will make the colour a bit lighter, but it should be this fluffy consistency. 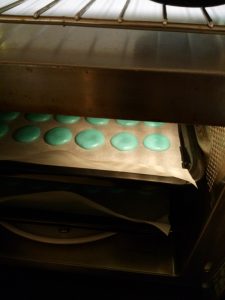 Pipe little rounds of the mixture onto parchment paper. Try to make them roughly the same size, because you need two for a single macaron, and it’s weird if one is large and the other one is small. Leave some room in between, because the mixture will set a bit.
Next comes the drying. You want the shells to ‘rise’ when you bake them, and the trick is to let the outside of the shell dry out, so that the egg whites can only expand downwards, yielding the ‘feet’ on the macaron shells. We dry them in the oven at 40 °C for 2×30 minutes. We swap the positions of the two baking trays in the oven, so that they dry out evenly. 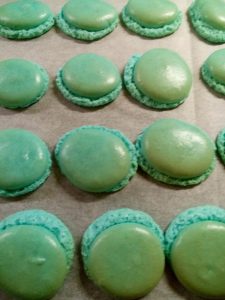 Then it’s in the middle of the oven on 160 °C for 20 minutes. The blue ones did weird things: you can see the ‘feet’, but they came out unevenly. It’ll have to do. The blue ones will be vanilla flavoured.
The exact time and temperature depends on your oven — you’ll need to experiment a bit. 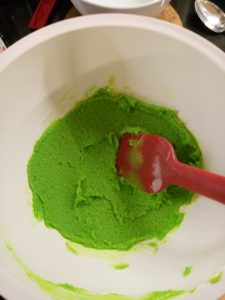 Next batch will be green, for green tea macarons. 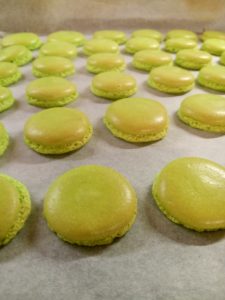 They came out better than the blue ones. Our oven doesn’t heat up completely evenly, so some of the shells have brown edges — that’s not supposed to happen with macaron shells, but I can’t do any better with our equipment. And would I want to invest hundreds of euros for a professional oven? Nah.
Just make sure that the shells are completely cooled down before peeling them off the paper. The outside should be smooth (not crunchy) and the inside a bit chewy. 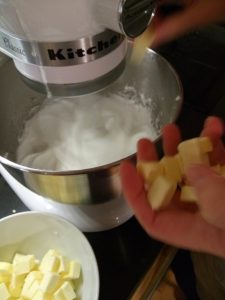 Next up: buttercream. Make another batch of the cooked meringue, switch to the flat beater, and then add 165 gr of butter to it. The heat of the meringue will melt the butter, but take care that the mixture doesn’t separate. This is also the time to add your flavouring. Some bakers use artificial flavourings, but I prefer naturals. So for the vanilla I used vanilla extract, and I used (food-grade) matcha powder for the green tea flavoured macarons. 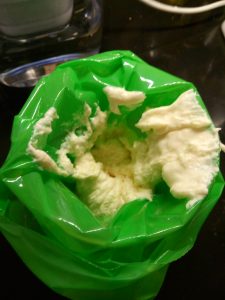 When it’s all done, put it in a piping bag and fill the shells. Seek out two shells of roughly the same size and pipe some of the cream on top of one, and place the second shell on top of that. Put the finished macarons in the fridge to let the cream firm up. 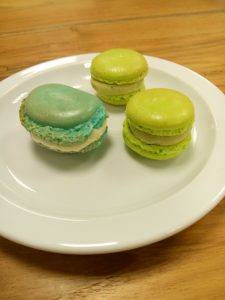 The finished result! As always, they were a huge success. The vanilla ones more so than the green tea — though I actually preferred the green tea, because the bitterness of the matcha really complements the sweetness of the shells and buttercream.

And with the release now done, I should have lower stress levels too, which is a nice added bonus.