Saturday was klik’s jukai, her layperson’s initiation into buddhism. It was part of the closing ceremonies of the zen retreat: there were three people getting their zen teacher diploma and two people doing jukai. As part of the initiation, klik got a buddhist name. I already knew this for weeks (which got me into trouble once she found out), and I had put it in silver foil on the box I made for her to store her rakusu: Gisho.

Gisho means “good start”, and is a reference to the concept of the “beginner’s mind”. That is the idea to approach everything with an open mind, never rely on routine. It is also a reference to a figure in a book of zen stories that is also called Gisho. It’s quite fitting.

When I visited friends in Groningen while klik was on her retreat (and I’ll write about that at a later time), I waked past a store selling decorations. Normally I’m not a fan of ‘decorations’: it’s all just stuff that simply accumulates — that doesn’t make my life any better. But I saw this excellent christmas tree ornament, and I had to get it! I mean, who thought it would be a good idea to mix buddhism with christmas? The two don’t have anything in common! But it’s a proper buddhist depiction of the Buddha: the right ‘curls’, the right ears, the right robes, the right meditation posture. And it’s large as well: 17 cm in height! 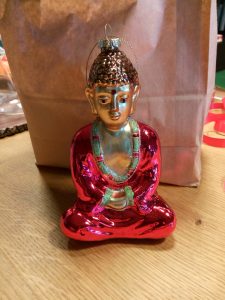 It will be the proud centre piece of our christmas tree come December!