Yesterday I dropped klik off at her retreat. It runs from Sunday afternoon to Saturday morning — early morning.

On Saturday, klik is going to do her jukai, a lay Buddhist ordination. It is a logical extension of the journey she has been on ever since she started zen meditation. As a friend of ours said: “If you want a house on the beach, you must learn to swim as well.” Her teacher is also leading the retreat, so it is a natural occasion to do the jukai.
When you do your jukai, you can start wearing a rakusu, a shortened version of a priest’s robe. (Though I just call it a bib… Scroll down on the page about the retreats to see the group photo: the people in front are wearing their rakusu.) You can buy them, but they’re quite expensive: it doesn’t take a lot of trouble to drop EUR 300 to get one. And of course every sect has their own version, so better make sure you’ve got the right one!
Klik made her own, based on the rakusu of her teacher, which she had on loan for that purpose. It was a lot of work — and try finding the right wooden rings! But she managed, and it is a beautiful piece.

I wanted to show my support and add something to the festivities. I decided to make a box to hold the rakusu: it’s something I can apply my skills to, and I like building boxes. I decided to got for the Japanese book box which we learned to make in a workshop a few years ago. Unfortunately, we lost the description, so I had to reconstruct that on my own. That took me one failed try and one failed scale model, but then I had a good idea on how to make it work! I ended up with a spreadsheet where I can plug in the desired inner dimensions of the box and the thickness of the board, and that will give me all the dimensions of the boards, linen and paper!
So this is what I have been doing today: 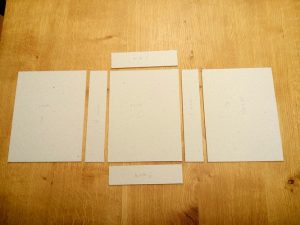 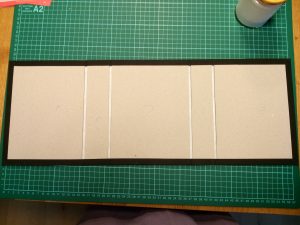 Second step: Boards on the linen.

As part of the ceremony, klik is going to receive a buddhist name from her teacher. I had contacted him before and asked for the name and how it should be written in kanji (Japanese characters), and he told me. But it’s still confidential: nobody else knows! The third step was that I wrote the buddhist name on the front cover of the box, with silver foil on the black linen. Obviously, I don’t have a photo of that to share with you. 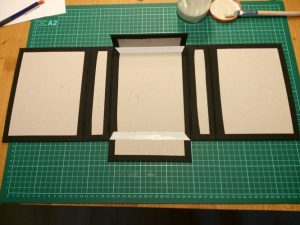 Fourth step: Every gap covered in linen and the sides added. 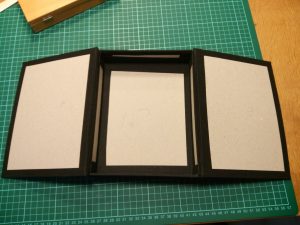 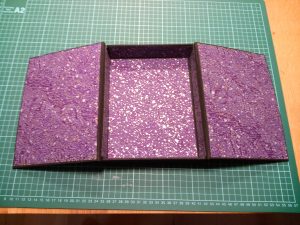 Sixth step: done! The paper is washi with a purple wisteria motif, with specs of silver and gold on it.

Here’s how it works:

(I put some paper over the name for the video…)

I’m very pleased with the result, and I can’t wait to have her teacher give her the box with the rakusu in it!