This year’s trip to Spiel Essen

The largest exhibition for tabletop gaming is held every year in Essen, in their ‘fairgrounds’ building — four days with six large halls filled with booths from game manufacturers, publishers and dealers. (And, because it’s Germany, there are also booths selling grilled sausages in between.) There is, predictably, a large offering from German manufacturers (not only is the majority of the public German, but there is a real designer boardgaming culture in Germany), but there are also many international offerings. Design collectives from Japan, Singapore, Korea and Taiwan bring pallets of their games and sell out during the pre-orders, and there are visitors from all over the world.
We’ve been going there for a few years now, and we went on the first day — not that we had a specific list of games we ‘needed’ to get before they sold out, but because the first day doesn’t have the most public. (And still it’s noisy and sometimes you’re stuck in foot traffic.) And yes, I did have a list of games I was interested in, but that was just a tentative list: things that I thought looked cool, but if we didn’t see/find them, it would be fine too. There was only one thing that I really wanted to buy, at the request of a friend who wanted to buy it for his wife. 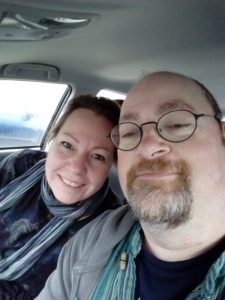 We hopped in the car around 09:00. Essen is about 90 minutes by car from home, so we’d arrive only 30 minutes after the doors opened. We didn’t fancy mixing in with the sweaty try-hards who sprint to all the booths selling their limited-quantity games. But it should still be early enough to get a decent parking spot near the fairgrounds. 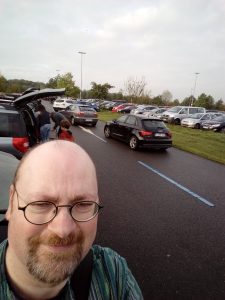 Nope, we were too late! Everything had already filled up, and we were directed to P10, which is quite far away from the fairgrounds. There is a shuttle bus service, but our experience with that from two (or three?) years back was quite horrible: it took forever to get to the fair, and we had to wait for about half an hour for a bus to take us back to the car park at the end, so we were crammed in the bus with too many people holding on to too many super-sized boardgame boxes… Needless to say, we were dreading the experience. 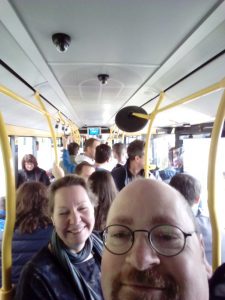 Turned out it wasn’t all that bad: at least not the bus to the fair. It took only 15 minutes before it was our turn to get into a bus. I’ve had far worse! (Though the whiny Dutch family standing in line behind us made me want to kick them in the shins…) 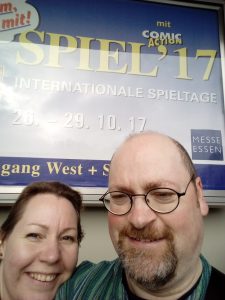 After about 10 minutes we arrived at the south entrance! We had bought our tickets online, so after a short bio-break we entered the fair. 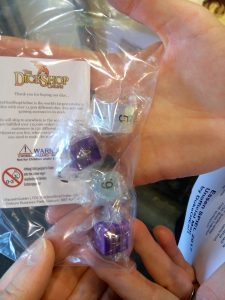 I had printed out the unofficial maps and marked the booths we were interested in. I had asked The Dice Shop Online, a specialty dice store, on Twitter if they were going to be there, and they told me their booth number. We had purchased two sets of their gemstone dice last year, and this year we got a set of opalite and purple turquoise dice! 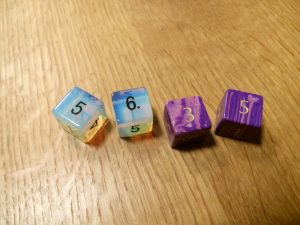 Here you can see the dice in their full glory, on our dining table. 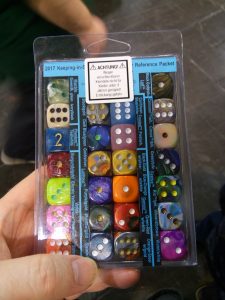 Chessex was there as well (of course they were). I bought this year’s dice style reference packet, so we can fill up the glass bowl of colourful dice on our table. The price was really odd, but that was because they directly converted to euro from pounds. 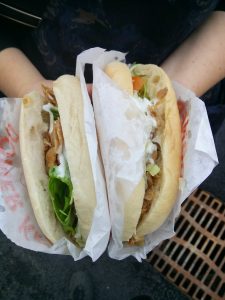 Our lunch: two döner. Service was really fast: the six people in the small food stall in the galleria were working really hard! We went outside and had a leisurely lunch. 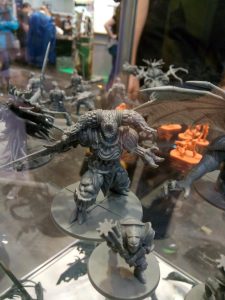 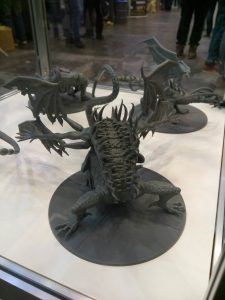 We passed the stand of Steamforged games. The miniatures of their Dark Souls boardgame look amazing. 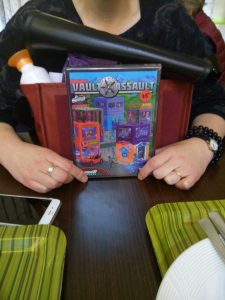 We went by the booth of Inside Up — they’re Canadian, judging from the flag they had up. We were given a demo of Vault Assault, which is a frantic dice game played in real-time (so no turns, everybody is rolling at the same time!) with a cops & robbers theme. We played the three-player version, but with four players you get also a cooperative aspect. After the demo, we bought the game from them, because it’s fun.

By then we met up with friends who were having lunch at the restaurant in Hall 3 — our usual ‘lunch date’. But phone reception was so bad that we couldn’t use our usual messaging app: there were probably too many phones at the same place. So we had lunch already, but we met up with them anyway, and had a piece of cake instead.
We mentioned that we were after this one game for a friend, and we had been looking for it, but we just couldn’t find it! We had asked someone who was carrying the game in a cloth bag with the game logo on it, and he provided directions — the wrong directions. So we complained about this to our friends, and they told us they had seen the game on offer, and provided directions — also wrong.
So we had given up, and decided to keep our eyes open, but not chase after this particular game because it was affecting our enjoyment of the fair. And we like to wander the halls with the ‘fringe’ stuff, like roleplaying games, comics, art, LARP weapons and very small home-grown game publishers, so we moved away from the halls with the big-name boardgame publishers to browse elsewhere. And then, at an empty booth (there were a lot of empty booths, surprisingly) we saw an ad for the game we were looking for, with the stand number on it! We checked the map: the publisher was clearly marked on it, so we couldn’t understand why we hadn’t found it on the map. Their logo (a blue orange) was suspended over their booth as well, so it was completely obvious..! 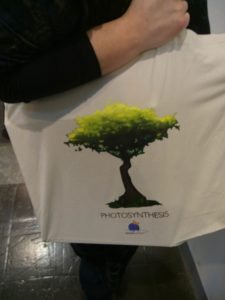 So we got the game, and got the cloth bag to carry it around in as well! I love those extras! 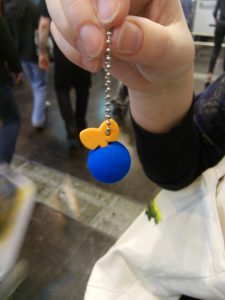 And we also got two of these: keychains of the publisher logo. 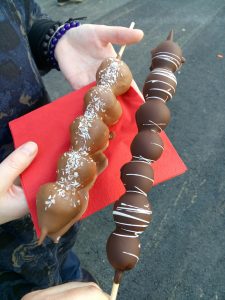 It was time for a snack. On the left are really sweet strawberries covered with milk chocolate and coconut rasp, on the right ‘wine grapes’ with bitter chocolate. It was amazing: juicy fruit in a thick layer of chocolate with just the right amount of ‘crunch’. Again, we went outside to cool off a bit and to get some fresh air! 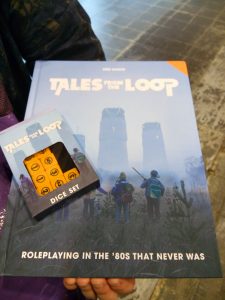 At the stand of Modiphius, I leafed through the new Star Trek RPG (amazing layout, but I have little interest in it). I also saw this game: it is based on the works of Simon Stålenhag, in which you play kids who have to confront a mystery in their town. I like the art and the atmosphere, and I heard good things about the system. So I bought the book and the dice set (not that the dice are anything but six-siders, but I like the idea of having the set). And because Modiphius is awesome, I got to write down my e-mail address so I could get a PDF of the book for free! 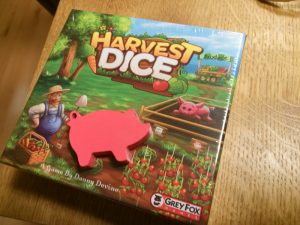 We also wandered by the booth of Grey Fox, and their Harvest Dice was on my list of interesting games. And it is an interesting game: dice drafting, but there are additional layers that add strategy and complexity.
In the game, you have a pig that you can feed veggies that you can’t plant, and the player who begins the turn gets a pig chit to signify that. But as a special for Spiel, they had made a special ‘pig meeple’ to serve that purpose. When we bought the game, we were handed a ticket with another booth number (that of the publisher), and when we presented the ticket there, we got the pig meeple (and we got to see the other games of the publisher, which made excellent business sense for them). 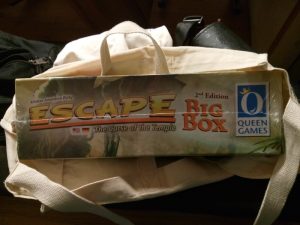 We saved this purchase for last. It’ll make a good christmas present for my sister’s family (and I don’t think she reads this blog, so I feel safe putting this photo here). It’s a cooperative, real-time dice rolling game (again) with a strict time limit. And this is the ‘big box’, which means it’s the base game and all expansions — for a very good price! We got another cloth bag, big enough to hold the box.

A friend and his sister were attending for the first time, and we were about to leave without having seen them (which is not a surprise, given the size of the fair and the crowds). I messaged him, and he mentioned getting a burger before leaving — and we literally stood only 10 meters away from us! We got a burger too (it would be late before we got home anyway, and it beats highway food), and caught up with them. They had done some shopping and had played some fun demos. They were planning to return next year, but had already started looking into ways to make their time more ‘productive’…!

After saying goodbye to them, we left the fair and we were dreading the way back to the car park. But just as we were descending the stairs, a bus arrived and we could easily find a spot! And when we arrived at the car park, there was no line for the parking ticket pay desk, so we were in the car and on the highway back home before we knew it! Such a big difference from that previous time…
On our way back home we did encounter some difficulties because part of a highway junction had been closed off for a bomb defusal… This area of Germany was the industrial centre, so it’s no wonder lots of bombing raids were conducted here, and apparently they found an unexploded bomb, probably during road works. I’m happy that it is being taken care of, but it meant that we got stuck in traffic for a bit.
We also had some rain, and it was very lucky that this only happened when we were in the car. We had left our jackets in the car, because it’s always warm in the fair halls, and I didn’t fancy waiting to check our coats in and out. If we had been waiting for a bus to arrive when the rain had started, then our trip back would have been miserable!

And then we arrived home, eleven hours after leaving. Kind of tired now…