Saturday, we visited the city of Haarlem to attend the official opening of the new zendo there.
(For those who do not know: my wife teaches zen meditation with zen.nl. It’s a franchise: individual zen teachers can set up their own location, using the methods and marketing of zen.nl. They will need, of course, a location to meditate in, and that room is called the zendo.)

The festivities were in two parts: there was a lecture by Rients Ritskes (founder of zen.nl), and then the official opening. Because there were too many people in attendance to fit comfortably in the zendo, that lecture was held in a former chapel. That was in a building that apparently served as the starting-point for the pilgrimage to Santiago de Compostella. Therefore the chapel was dedicated to St James, and the exterior was adorned with mediterranean scallops (the Dutch name means “St James shells”), which are the symbol of the pilgrimage. Of course, the building hasn’t been in use as such for a long time, and now it’s some kind of community centre that you can hire for your functions.

After the lecture, we walked through the charming city centre of Haarlem to the location of the zendo, which was then officially opened by cutting a ribbon and by a tea ceremony. There were drinks afterwards!

We left relatively early, and had dinner in Haarlem before returning home. A day well spent! 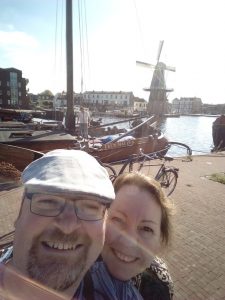 Walking along the water. There were houseboats along the edge: not a bad spot to live! 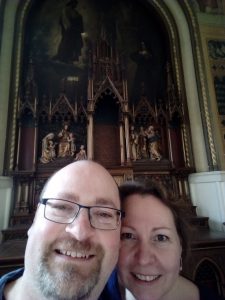 The centrepiece of the chapel. Looks really classy, but probably plaster painted to look like wood carving… 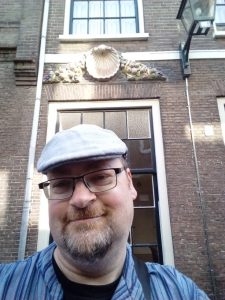 Outside with the shell! 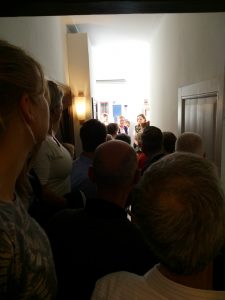 The official opening was a bit… crowded. Luckily we could all enter the zendo itself after the ribbon-cutting! 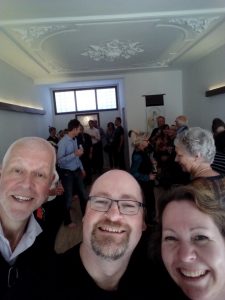 The new zendo! It’s a really nice space with a very modern feel, combined with the traditional elements still present in the ceiling. Left: Rients Ritskes who posed with us for the crappy selfie!