The past two weeks, we went on a vacation to London. Here’s some crappy selfies I took, and my thoughts about the places and venues where these crappy selfies were taken.

The Natural History Museum
I hadn’t been there before, but it is one of those museums where you can spend the whole day — and we did. (There will be more of those…)
Of course, there is the large array of stuffed and prepared animals, and there is a very large dinosaur exhibit. That’s all very interesting to see, but we spent most time in the geological side of things. Exhibits about volcanoes and earthquakes (including an earthquake simulator that emulated the large Kobe earthquake of 1995) and many beautiful minerals and gemstones.
At the end of the day, we also saw the Albert Memorial, just across from the Royal Albert Hall. 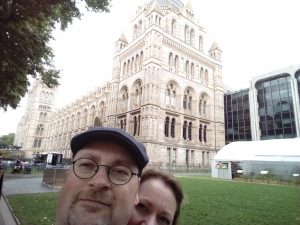 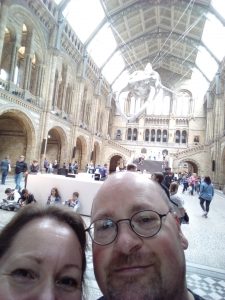 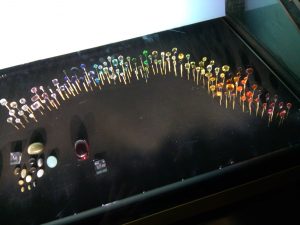 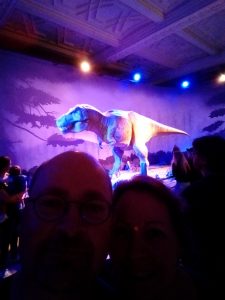 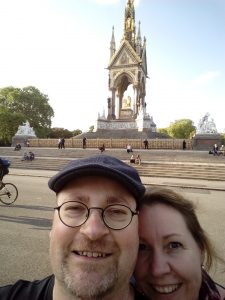 Victoria & Albert Museum
Dedicated to human creativity in all its aspects, it has a large collection of crafts & arts artefacts from all over the world and from all time periods. We had visited this before, but this time we went to see different things. There was also a very interesting exhibition about plywood and it’s applications in building and furniture, which was free to access.
Unfortunately, it was so busy that we could not find a place to sit to eat lunch at the V&A, so we went out for lunch and came back afterwards. 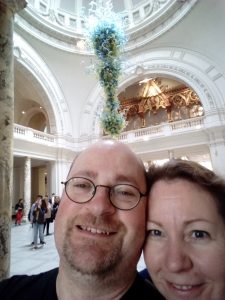 Greenwich, Fan Museum & Tower Bridge
We went to Greenwich on Sunday. It was a beautiful day, and at the square where Cutty Sark is displayed, there were lots of people enjoying the weather. We also visited Greenwich Market, and had a ‘ramen burger’ (a hamburger with patties of fried noodles instead of buns) at the food stalls there before going on to the Fan Museum. That was a tip from our friend Gert, and it was a delightful little museum. The orangery was open too, but we were still too full of the burger to go for the full afternoon tea, so we just had a cup of tea/coffee.
Then we took the DLR back to Tower Hill again, and walker around the Tower. We also saw the Tower Bridge go open to let a sailing ship pass. 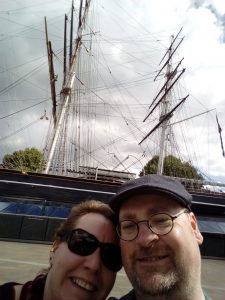 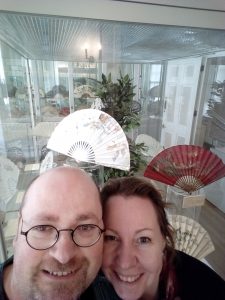 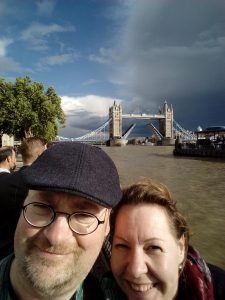 Buckingham Palace
Every year, over the summer, the State Rooms in Buckingham Palace are open to the public. We bought tickets for the 13:00 entrance (entering is timed, but you can make your way through the State Rooms at your own pace). We went to Westminster to see the tower housing Big Ben and the Westminster Palace (through the fences), walked by Westminster Abbey (closed because of worship) and watched one of the horses of the Horse Guards make a nuisance of itself. We made our way along the Mall to the Victoria Monument in front of the palace, and then made our way in.
It’s very interesting to see these rooms, and there are some architectural tricks that I quite liked. It’s not at the level of opulence that some of the palaces in Bavaria have, but what makes it special is that these rooms are, in fact, still in use for their intended purpose.
We ended with a cup of tea and a cake in the Garden Cafe. From paper plates, because the queen doesn’t like washing up. 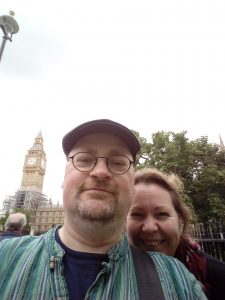 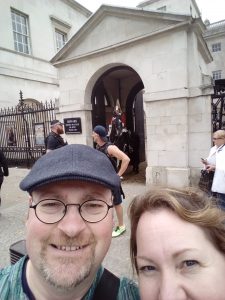 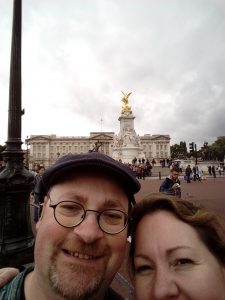 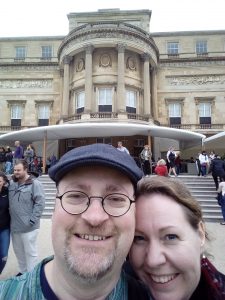 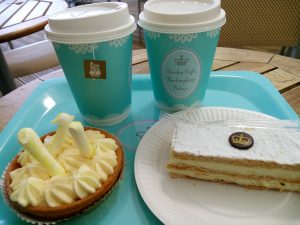 British Museum
We visited the British Museum, with its very interesting exhibits. We checked out the Japan section (for obvious reasons), but also went to see some of the Egyptian and early medieval sections, as well as the clock sections and some other things we saw along the way. In the end, we were sent away because it was closing time…! 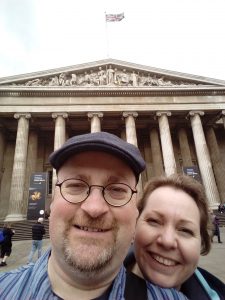 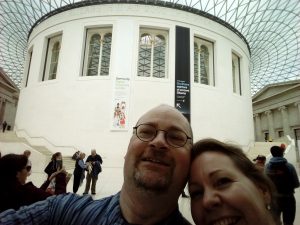 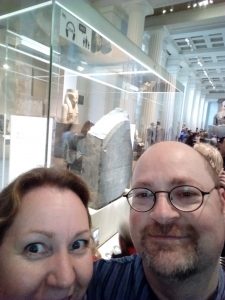 London Eye
From booking.com, we got a mysterious QR code that would, supposedly, get us EUR 100 to spend on various London attractions, amongst which was the London Eye. So we thought we’d just try it out, and it worked! So we got two fast-lane tickets for free! That made it worthwhile, because the London Eye is nice, but it’s not the 30 pounds for a fast lane ticket nice. It doesn’t go that high, and while the view is nice, it’s not high up enough to see all the major landmarks. And it’s a total tourist trap: when you enter, you have to pose in front of a green screen, and of course you can get that photo when you leave, for the mere sum of 20 pounds…
If you’re on a budget, then the 10th floor of the Tate Modern is just as good (better view of St. Paul’s even) and free! 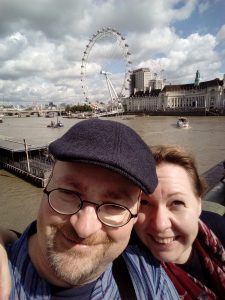 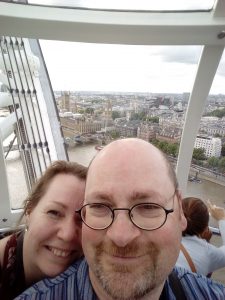 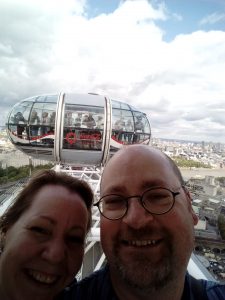 Tate Modern
The Tate Modern has a lot of modern art, and some of the collections are free to view. The building itself is pretty cool as well: it’s an old power station, so there’s fuel tanks and all sorts of oddly shaped large open spaces. The tenth floor has an all-around viewing platform. The restaurant on the ninth floor is a rather fancy sit-down affair, which we only found out after we were seated. The food was nice though, but if you’re only in for a sandwich, you’re better off at the ground floor restaurant. 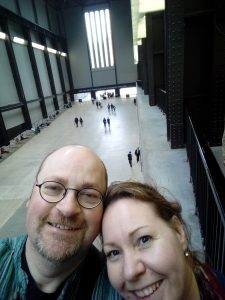 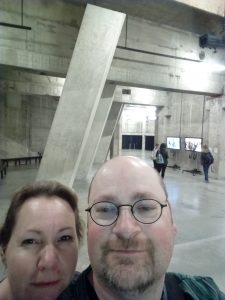 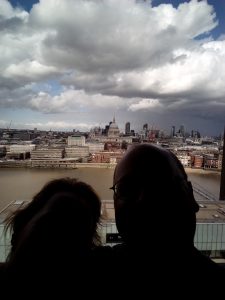 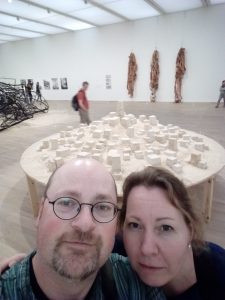 we’ve had a lovely time, but we were happy to be back home (and get the kitties back home too)!

(Also, this is the first post to have images included, so I’m wondering how that will crosspost to LJ. It’ll probably work out fine, because the full URL is in the image tags.)