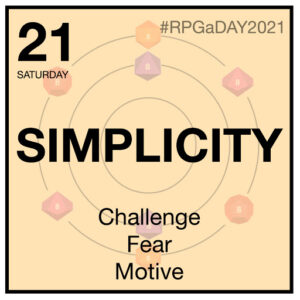 I’ve written before about how RPGs are about something. The challenge then becomes to model that particular thing in the rules in the simplest way possible. At least, I vastly prefer rulesets that are simple: overly complex rules break immersion, and rather than spend a lot of time on resolving an action, I prefer to resolve quickly so that the narrative can progress. But everyone has their own trade-off between simplicity and whether they feel the thing the game is about is modeled with enough detail. I’m firmly of the belief that realism in RPGs should not be a goal in itself because that produces overwrought rulesets.
But if you want to play a game that is precisely about duels with swords, then you probably want to spend a lot of attention to all the ways people can stab and slice, feints, ripostes etcetera. That ruleset would be so much more complicated in the combat department than D&D’s simple “you attack, if you hit you roll for damage” mode. So I do think it’s a trade-off between simplicity and ‘enough’ fidelity — and every game has its own trade-offs to make in there.

One of the things I noticed in the Amber Diceless RPG is that actions get really complicated precisely because of the simple rules. The rules state that if you’re in a Warfare conflict (anything involving weapons), the character with the highest Warfare score will always win, all things being equal — no dice rolls necessary. So if you’re not the character with the highest Warfare in a conflict, you have a vested interest in not making things equal. Suppose you have a much higher Endurance score than your opponent: you could fight purely defensively and tire them out. If you have a higher Psyche score, you could try to use magic or one of your powers during the fight to destabilize them. If you have a higher Strength (which covers physical conflicts without weapons), then you could try to take a hit (if your Endurance is high enough to take it) and grab ’em to wrestle them to the ground…
So rather than standing toe-to-toe and taking turns to bash each other with a crowbar with a sharpened edge, fights in the ADRPG tend to be very descriptive, with combatants trying to gain an advantage through their actions. Rather than model this all in the rules, it is precisely the simplicity of the rules that makes a more narrative approach vital.
Of course, this requires a large amount of trust between the GM and the players, which I’ve written about earlier this month.