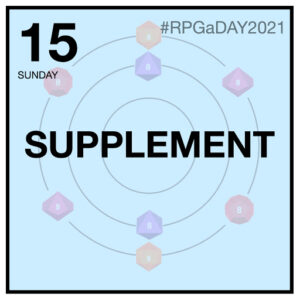 (Every day there are alternative prompts, but I guess on Sunday everyone must talk about the same thing? Huh.)

A good supplement adds a new perspective to an existing game, vastly expanding the roleplaying and/or adventuring opportunities for the game. As such, I think Shadow Knight, the (sadly) only supplement for the Amber Diceless RPG.
There are ten Amber novels, and they come in two cycles: the first one is narrated by Corwin, one of the nine princes, and talks about his battles to acquire the throne of Amber. The second cycle is set much later and is narrated by Corwin’s son Merlin, who is building artefacts and trying to manoeuver his way around the political situations in both Amber and the Courts of Chaos. The second cycle is not universally loved, and it was not uncommon to see a GM state that the Merlin-cycle had not happened in their game.
While Corwin is single-mindedly pursuing his goal in the most military manner possible, Merlin is playing both sides and building up his own power-base in order to set his own agenda. And Shadow Knight supports that mode of play, with new powers and descriptions of the characters encountered in the Merlin cycle. The irony is that even if the GM disliked the Merlin cycle, most Amber games were more like that saga rather than the Corwin saga — a rich setting populated with many different factions with their own goals and motivations is much more interesting to set characters loose in.

But the supplement I used the most is, beyond a doubt, the Rolemaster Companion II (which we abbreviated to ‘RoCo2’). It is very popular in some circles to sump on Rolemaster for being too complex, but it’s really not. Yes, there are many charts, but often, a simple chart-lookup is much faster than doing all kinds of calculations at the table. And the tables allow for subtle things like ‘electricity does more damage to a guy in full plate’ without any extra rules needed.
Another thing I like about Rolemaster is that it’s skill-based. Your attributes do factor in on your chances of success, but beyond lvl 3 that influence is only minimal — so it’s all about the training. And every character can learn every skill, so you don’t have to feel restricted by your profession. But your profession does influence how many Development Points a rank in a skill costs. Weapon skills are really cheap for a Fighter, a bit more expensive for a Thief and very expensive for most magic users. If you were playing a Fighter and you had quite a few points left, you could invest that in learning some magic!
So when you were creating a character or giving them an additional level, you had to know the cost of their skill ranks for their profession. And at the end of RoCo2 there was a large table that listed all the skills (and which stats were involved) and the point cost per rank per profession. We had made photocopies of these pages and created several booklets so that everyone could refer to their own copy. I think I even might have my own copy somewhere…