Today’s prompt for RPG-a-Day is ‘Medium’. 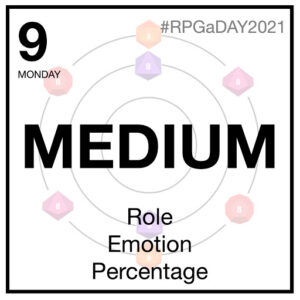 So we did ‘small’, and now we’re on ‘medium’? At least there’s no ‘large’ prompt further down the line. 😉

I think RPGs are an awesome medium for generating a narrative. The interaction between the background that the GM provides and the freedom of the players to have their characters react to that, can give really nice twists and turns. Yes, it will never be as tightly plotted as a novel or other pre-defined medium, but that is exactly its charm. And of course, as the GM you have an idea of what is likely to happen, but often the players choose a different route — sometimes subtly different, sometimes radically so.
Yesterday evening, I finished reading through the Nobilis book, and I’m trying to get a small campaign going. And a lot of what is going to happen is dependent on the choices the players make: they get to choose the Domains of their Nobles (basically the thing they are the deities of, like Swords or Adult-onset Diabetes), their attribute values, their Imperator (basically their ‘over-deity’) and their design for their Chancel (basically the pocket-dimension that serves as their home turf). Since I don’t know those things in advance, I can’t plot out something — it will be an interaction between the choices of the players and my imagination. Quite different from, say, D&D, where every adventuring party is kind-of interchangable with every other adventuring party…

Every so often, you encounter a GM who is a frustrated novelist: they have a tightly plotted story in their mind, and nothing the characters do can derail the plot train. The players are basically bystanders to the GMs story. Those campaigns are always a bad experience for everyone involved: the GM will be frustrated that the players want to do something different than he had imagined, and the players will be frustrated that their every attempt at asserting some kind of agency over what happens in the game is thwarted. For GMs like that, RPGs are just not the right medium.