Today’s prompt for RPG-a-Day is ‘Small’. 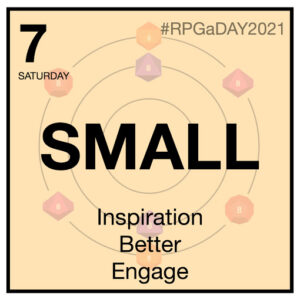 Let’s think, as a thought experiment, as to what is the absolute minimum you need to make an RPG. There are full RPGs contained on a single page (like Lasers & Feelings and all of its variants), but could you go even smaller? I think you can.
I think you only need to satisfy three requirements in order for your game to be an RPG:

That’s not too bad. Let’s see if we can create a little RPG that satisfies these requirements:

Of course, I’d embellish it more with information on the setting (who were the precursors? why is their knowledge lost?) and the resolution (what target number would typical tasks be? what type of tasks are governed by which attribute?), but all of the basics are there.