Day 3 of RPGaDay, and today’s topic is ‘tactic’. 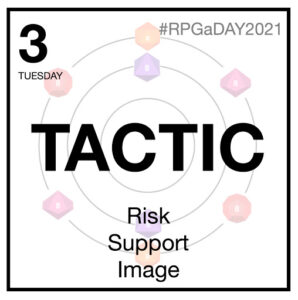 In RPG terms, a game is called ‘tactical’ if it involves detailed rules for maneuvering and position in combat. The best known examples of games like that are 3rd edition D&D and Pathfinder, with their 5-foot grids and flanking rules. You can’t really play those games on anything else than a gridded ‘battle-map’, and it’s more a question of pushing your token around rather than playing a role and pulling cool stunts. (To be fair, these games do include rules for cool stunts, but those are often reserved for higher levels, and are inaccessible for a starting character.)
But I could also argue that a game of Torchbearer (of which I’ve played three sessions now) is also very tactical. Not in the combat rules (those are very abstracted!) but in manipulating the pacing and the number of tests to make sure your character has the best outcome once ‘the grind’ comes along. Your strategy may be to loot a crypt, but the tactics tell you to wait for searching for treasure after you’ve made camp, to increase your chances.

I have a love-hate relationship with tactics. I want my character to do cool stuff that is according to their drives, but I also appreciate rules that show how certain choices have certain effects.
Too little, and it’s just rolling dice until one side wins — not really satisfactory. Ryuutama tries to spice things up a bit by inviting the players to ‘invent’ objects that can be used in combat for a bonus on their roll, but other than that the outcomes are only minimally driven by detailed player decisions.
Too much, and it becomes more of a boardgame in which the character is forgotten and it feels more like a generic gamepiece that you’re manipulating in order to get the best outcome.

For Fearless!, I’m trying to strike a balance between simple rules (which makes combat move fast as there are few special rules and exceptions) and making player decisions count. It will introduce some boardgame-like elements (notably the multiple damage tracks), but the result will (should…) be that players can choose one of several approaches that each give a different result.