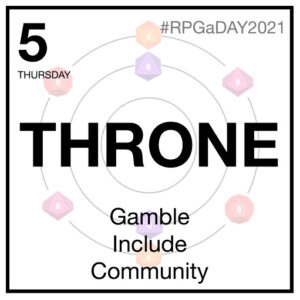 I am reading through Nobilis, an RPG from 2001 that I bought then and never really read through completely. Now that I’m doing this, I remember why: the setting and the concepts are really cool, but the book does a really bad job of communicating what it wants you to do with it. Still, I set myself this task and I will see it through, because it is interesting.
In Nobilis, you play a god — a human endowed with a shard of a divine soul, which gives you control over one aspect of reality. Just like in the Amber Diceless RPG, you’re playing a character which is vastly more powerful than your typical D&D character. This means that your character should be partly self-motivated, because most challenges that motivates ‘normal’ characters (“get rich!”) are just not an issue for them. As is the case with most of these games, the setting is a co-production between the GM and the players: the players seek out something (support, information, a special item) and the GM constructs a piece of setting and NPCs around that. The campaign setting grows in the playing, which in turn provides incentives for the characters to get involved. You seek support for a particular endeavour, you find some NPCs that will provide that support, and then some time later they require some assistance so your character has new goals, etc.

You need something to start this all off: an initial goal which motivates the character to undertake some projects. And in the Amber Diceless RPG, the default is a ‘Throne War’: the monarch is dead (or, most likely, has disappeared), and now the royal family is at each others’ throats for the right to take their place. Dirty deeds, alliances, deals — everything is allowed.
More than one campaign started out as a throne war, but ran on long after a new monarch was chosen/condoned, with the characters dealing with the aftermath and embroiled in whatever projects and (social) entanglements were stirred up in the meantime.

The Nobilis book rightly identifies that almost all conflicts that the characters will be involved in, are usually social conflicts, but has no advice on how this all starts out. (Though to be fair, there is a section with a sample campaign and I haven’t gotten to that part yet.)
In 2015, I played in a (sadly short-lived) play-by-forum game of Nobilis, and there the concept was also in effect: there was an initial mystery, and investigating that saw our characters forge connections with NPCs and getting involved in their schemes and situations. I have been thinking of running a Nobilis game, and I am struggling with coming up with the right ‘trigger’. But maybe that should also be dependent on the characters…