I have been making chocolates with flexible silicone molds, because those are easy to get the chocolate out of once it’s been set. I did try an experiment with filled chocolates: applying the chocolate with a brush to the edge of the mold, let that set, then pour in the filling (I used caramel sauce) and then fill it off with more chocolate. However, the edges were too thin and we did not get the chocolates out of the mold in one piece! 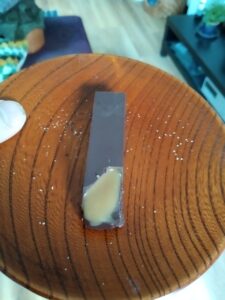 Still delicious though, but sticky and messy!

Another attempt was to fill the molds with (white) chocolate, then scrape a hollow with a spoon when it had set for a bit, fill that with the sauce and then fill that up again with (bitter) chocolate. It just wasn’t what I was looking for. 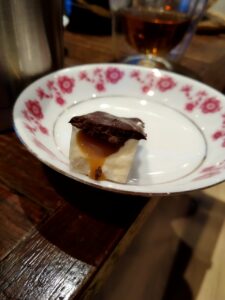 Still delicious, but didn’t have that ‘wow’ factor!

There is another style of chocolate molds: the stiff polycarbonate ones. I did some research (on YouTube, where else?) and the videos make it seem really easy to make filled chocolates with these molds: just pour in your chocolate, then pour it all out, put in the filling in the hollow shells, fill them off and then gently tap them out of the mold when they’ve completely set. So I got a set of molds in, and…
…it was a total disaster. It was really, really disappointing, and it took me some time to get over that. But we did try again and managed to produce a batch of really nice chocolates. I don’t have photos of the results, completely forgot… 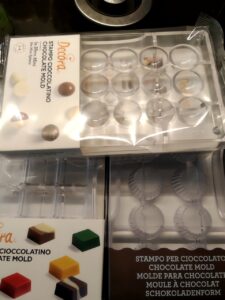 So I ordered another set of molds, with some of the birthday money I got from my parents in advance!

Most of our YouTube viewing is centered around people making lots of really intricate cakes, so when a new, less complicated recipe for macarons turned up on our homepage, I was intrigued. So I tried it out, and apart from some experimenting with the needed cooking time in our oven, it works really well! In the video, the cook suggests using a ganache as filling — I’ve seen that suggested before, but I had been using the buttercream recipe I learned at the macaron workshop so far. But the drawback of that one is that it gets quite soft at room temperature, so if you press down too hard on the macaron, you’ll make a mess!
So I made some coffee ganache (with white chocolate and instant coffee mixed in the cream), and it works really well too — it’s nicely firm, so you can serve them at room temperature. 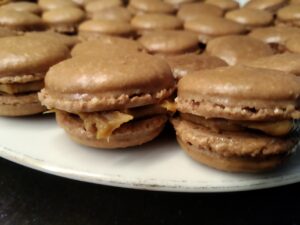 We made smallish shells, they were pretty cute! Klik took some to her mother, and she was pleased with them too.

But of course, we now had yolks left because the macarons only use the egg whites. 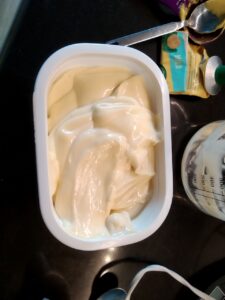 So I made mayonaise for the first time ever. I knew it was easy, but I had just never bothered to search for a recipe. Now, I don’t think I’ll ever buy mayonaise again.