Things that happened this week

A power interruption. We had gotten a letter from the company that manages the power lines that they’d be working on the infrastructure on Monday, from 08:00 to 12:00. That’s quite a long time, and no power means no heating, no hot water and no internet. I had reserved a spot at the office, but on Sunday I really didn’t feel like going — who would want to sit alone in an enormous empty office while being forced to drink the horrible tea there? So I cancelled the reservation — I could always use my phone as a hotspot, and if everything else failed I’d just take that time off.
We made sure to have all of our electronics charged, as well as the powerbank and all laptops. We got up extra early so that Klik could take a shower and I cranked the heating up so that the house would get a bit warm. I also made coffee and tea and put it in a thermos to keep it warm. And sure enough, at 08:09, the power went out.
…and it turned on again at 08:28. And stayed on. As usual, we were overprepared, but we’re not complaining. And I was glad I had resolved to stay home, because the trip to the office would have almost taken longer than the actual power cut.

My car got a new battery. Last Friday, my car refused to open with the keyless entry, and when Klik had opened it up with the key, it refused to start. (I had already left in her car to do the grocery shopping.) I had road-side assistance from Toyota, which I called on Tuesday. Within an hour a guy with a tow truck showed up, and he quickly determined that it was the (small) starting battery that didn’t have any charge left. We started the car with an external battery pack, and I drove to the garage. They took some measurements and the battery said it was OK, but it’s getting on in age… So I decided to have them put in a fresh battery.

I pickled some red onions. Super easy recipe, but quite delicious. I like to put them on my salad. 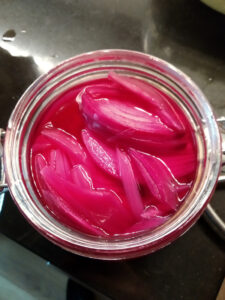 Some local friends started playing Dauntless too. I know these people from the local Pokemon Go scene, and they own a Switch too. We are in some communal chat groups, and on Saturday they sent me a chat asking if I played too. It’s been a lot of fun to team up with them and to show them the ropes. But they’re quite hard-core and have been playing through all 50 levels of the hunt pass in less than a week!
I am a member of a guild, but most of the players there live in Australia, so I often don’t have anyone to team up with when I play in the evenings. And while it can be fun to team up with a group of random players, that is really “hit or miss”. So having people to go around the islands with and helping each other is a lot of fun. It’s what makes co-op gaming so fun.

My second D&D group is approaching the end of the scenario. They’re playing through The Forest Shrine, my second D&D scenario, and they’ve arrived at the ‘end fight’. The first time they attempted the fight, it almost ended in a Total Party Kill and the group had to beat a hasty retreat. Since then, I’ve talked to a few of the players about their character’s abilities and how that interlocks with the rest of the group. The second time around, their tactics were much better and they really coordinated their actions. It’s still an interesting fight, but they were never in the kind of danger they faced during their first try — even though the opposition is the same. D&D really rewards ‘system mastery’ in that way.
I already have an idea of a sequel, but I want to talk to the players first on what they would like to see more of.