I’ve been on a manga-reading spree these days. It all started out with Dungeon Meshi, which merges my interest in RPGs and dungeon delving with my interest in cooking and eating. From there, I branched out to other manga, with a specific focus on manga featuring cooking and food. One of the manga that I came across with and really liked was Isekai Izakaya Nobu, about an izakaya (a pub that also serves food) whose front door connects to a fantasy world! So their customers are inhabitants of this vaguely European-styled fantasy world (most of the ‘foreign’ terms are German inspired) that learn to appreciate Japanese cuisine. It’s a fun manga, and while I know quite a few ingredients and dishes, it’s fun to learn alongside the customers about them.
And then I found out that there is an anime made from the manga. It has a bit of a weird set-up, with the first part of every episode is an anime version of a chapter of the manga. The second part is the live-action “Nobu Plus” segment, which alternates between a cook showing how to cook the dish featured in the anime and a washed-up folk singer visiting all kinds of bars to sample the same food as was served in the anime.

One of the recipes featured was Kakiage, kind of a large tempura with smaller ingredients stuck together in batter. This inspired me, and I wanted to try it! Instead of small shrimps, I substituted smaller cubes of cooked ham, but I kept the onion and carrot. 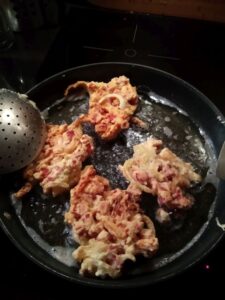 Shallow-frying the kakiage. I used a bit more egg in the batter, so it wasn’t that crispy — I will need to experiment a bit more. 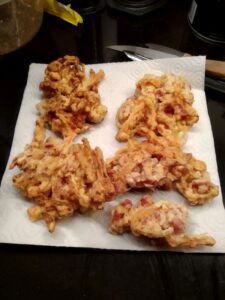 It was more pancake-y because of the eggs, but still they fried up really good. 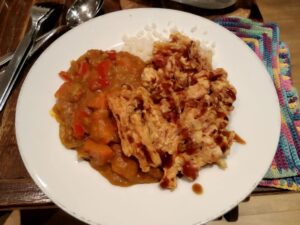 We ate the kakiage with Japanese curry, with carrot, sweet potato and bell pepper as ingredients. Instead of rice we used ‘cauliflower rice’ — it’s almost as delicious as normal rice and has much fewer carbohydrates. (Though I think that was handily offset by the sheer volume of kakiage and how fat those were…)