Every evening we re-group and watch a few videos on YouTube. I’ve built up quite a nice bubble with travel videos (mostly in Japan…), cooking, architecture and history, so it’s not hard to find interesting stuff to watch.
Since mid-September, there were some videos popping up about moon cakes, the traditional sweets to eat during the Chinese mid-autumn festival — which follows the lunar calendar and was mid-September this year. And… I got kind of obsessed with the variety of fillings and the beautiful designs. Baking/patisserie is a bit of a hobby of mine, as anyone who has been following me for a while knows — and I just couldn’t let it go. So I ordered a moon cake press for 50 gram moon cakes. Last Saturday it came in, and Sunday we went to the Asian supermarket to get the ingredients.
(Pro-tip: if the lady in the video is handling the glutinous rice dough with plastic gloves, this is not for show…)

At the end of the day, we had twelve snow-skin moon cakes: six with a home-made sweet red bean filling and six with a pre-made lotus bean paste filling around an almond! It’s a bit too much, because the shells dried out as the week progressed. Maybe we need to make smaller batches. And of course we still need to try out the more traditional baked-shell moon cakes too! 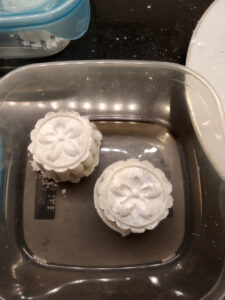 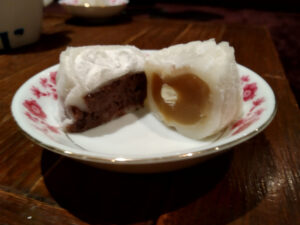