Yesterday, we visited Essen for the annual Spiel tabletop gaming exhibition. My purchase list was empty, but as usual we didn’t return empty-handed… We left a bit after 9 am, and went straight to P10, the off-site parking with lots of capacity, as the parking near the Messe itself fills up almost immediately. We were not going to make the same mistake as last year, when we spend a lot of time in a traffic jam past the Messe, and ending up at P10 anyway. 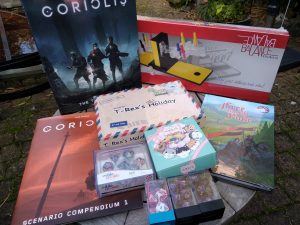 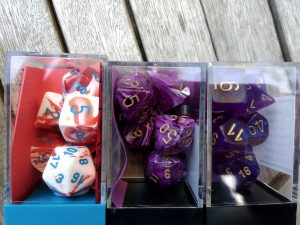 These three dice sets from Chessex called out to us. I especially like the middle one: the swirly purple really appeals to me. 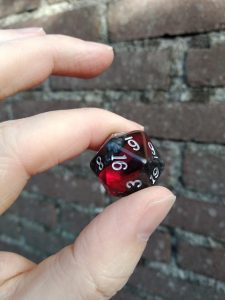 We also swung by the stand of Oakie Doakie Dice, and selected a set of these dice. Part of it is opaque, part of it is transparent. 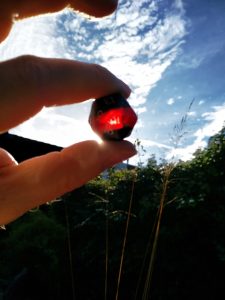 Really attractive under the light! And the set came in a premium clear plastic case, too. And we got it handed to us in a branded little paper bag, which also contained a branded pen and little notebook. Their basic sets are also pretty cheap too — though of course this type one isn’t ‘basic’. 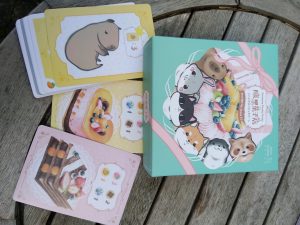 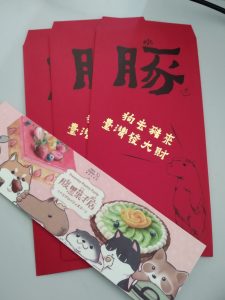 We did get some cute extras to go with it: a Frenemy Pastry Party bookmark and a set of three gold foil-on-red envelopes featuring the capybara. Really nice gesture! 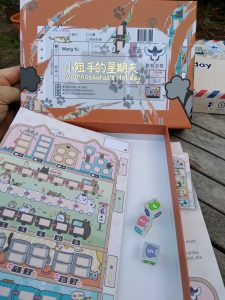 If there’s one thing that Asian game companies do well, it is illustrations of cute cats. I don’t know why, but I’m totally there for it. So we might have bought T-Rex’s Holiday because of the cat theme… We didn’t get a second pad of play forms: if needed we’ll just scan one and print it a few times. 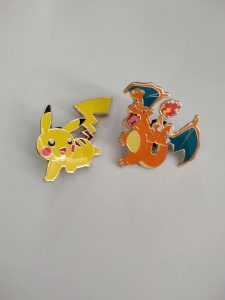 I got these pins at the Pokemon stand. I was ready to pay for them, but I couldn’t, because they were free… The guy also gave me a hand full of boosters/trial packs “for the kids”… I’ve already found some local players to give the packs to, but I’m keeping the pins myself! 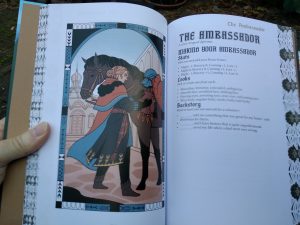 A character illustration from Free From The Yoke, where you play a character trying to fill in the power vacuum after a revolt has left your land without a ruler. Nice little hardcover book, could be a cool game. Most of the interior art is royalty-free art from Wikimedia (looks pre-raphaelite to my untrained eye), which I think is a bit of a miss since it’s not tightly coupled with the theme of the book.

I didn’t make a good photo of it, but we also bought Balance Duels from the designer, who, as it turns out, is Dutch. He was demo’ing the game, giving some great feedback on the rules and possible moves. We liked the physicality of it all, and after finishing our game, we bought a copy. 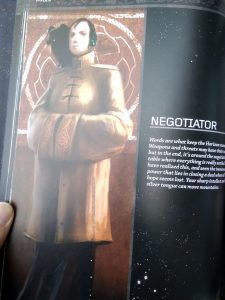 At the stand of the Free League (a Swedish RPG author collective), I got the core rulebook for Coriolis: the Third Horizon. I’ve seen it before, and I have a complete line from one of their games (Tales from the Loop), so of course I swung by their stand. They used to be distributed through another publisher (who had a stand near them), but now they’re big enough to stand on their own.
All their books are of consistent high quality, and their ‘house system’ works well. And this book billed itself as “1001 nights in space”, and that appealed to me. It doesn’t really take a lot of effort to find a sci-fi RPG that’s all dark and horror and stuff, but if I want dark and horror, I might as well go to work ;). So I was curious, and the book is gorgeous, and I had money burning in my pocket… 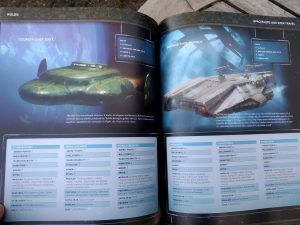 And who doesn’t like spaceships that have a configuration called “Flying Circus”!?
I also got the first scenario compendium, for the off-chance I ever get to play it…

We had a delicious pulled beef burrito to end the day, and left the fair as it was winding down. 19:13 we were back at the car park, and it took us some time to find our car back — next year we really need to make sure we take a look at the signs! We were back home before 9 pm, which wasn’t bad at all.
It was not as busy as I remember from last year — but then we went on the Thursday, which perhaps draws more deal and novelty hunters. Yes, hall 3 was jam-packed, because that’s where all the big stands from all the big publishers are, but the rest of the halls were quite navigable. And hall 5 and especially 6, where most of the ‘fringe’ stuff was (like RPGs…) were nice and quiet (relatively). Not sure what we’ll do next year (a lot also depends on klik’s working schedule), but I certainly didn’t regret going on Friday.