Every year, when the end of October looms, it’s time for Spiel, the largest tabletop gaming exhibition in the world! It’s held in Essen, which is about a 90 minute drive from our home, and we have been attending on a single day for some years now. We prefer going on the first day (when everything (and everyone!) is still relatively fresh), but it wasn’t clear until late whether klik had to work on Thursday evening. But her lesson on Thursday was cancelled because everyone was out, because it’s the fall vacation here — so we could go on Thursday after all.
We set out at 09:00, which would see us arrive at the fair about 30 minutes after opening. When we started going, quite a few years ago, we could always park close to the fairgrounds themselves. Later, it got busier and we had to park in a parking garage a bit of a walk away. We were aiming at that again this year, but everything was full as we arrived. And since every road towards the fair had been jam-packed with cars, it took us a long, long time to get to the off-site parking where we could park and grab a shuttlebus. Next year, we might leave earlier, and we’ll go to the offsite parking straight away — it’s conveniently just off the highway (for future reference: exit 26 of the A52), and the shuttle buses are quite frequent.

So we were off to a bad/late start, but we had an excellent day anyway. We didn’t have enough time to look at everything (ain’t nobody got time for that!) but we managed to hit all the stands I had marked up as being interesting before we joined B&G for afternoon tea, so after that we just wandered the halls. Mainly halls 4, 5 and 6, because they’re not as crowded, and that’s where all the ‘odd’ stuff is: the first three halls are large hard-core boardgaming companies, but the halls with the larger numbers are the smaller publishers, RPG companies, cosplay accessories etcetera. It’s a bit more chaotic, but I find it more interesting. 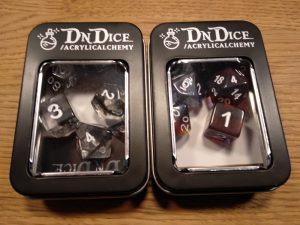 Did we need more dice? No, of course not. But we always want more! DnDice was selling crazy expensive metal dice (a EUR 400 platinum-coated set…), but they also had dice sets in very attractive colour combinations, housed in an attractive metal tin for easy storage and transport! They were very, very reasonably priced, so we got two. 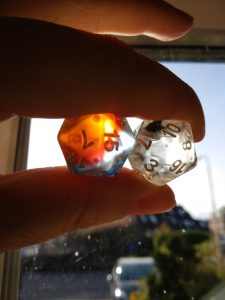 The D20s of both sets held against the sunlight. The left one has blue, clear and orange/yellow bands, the right one is clear with ‘smoky’ spots throughout. 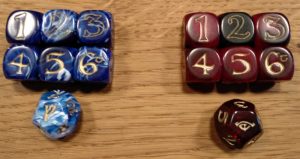 There were two new sets of dice out for The One Ring. The blue/white one is kind of hard to read, but it’s gorgeous. Red and gold are always a good combination, and with the imagery of the Eye of Sauron, it looks extra menacing! 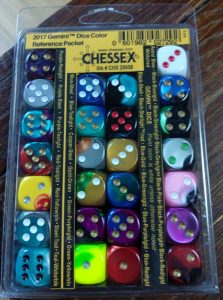 Just like with previous years, I bought one of Chessex’ reference packets. It’s an excellent way to get a large number of attractive dice. 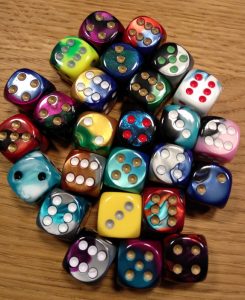 Personally, I prefer D6’es with numbers instead of pips, but the great colour combinations on all of these makes that I don’t care too much! I put this bunch in our ‘dice pot’, which is now completely filled. Not sure if we’re going to make a new one, or if I’ll just not get a reference packet next year. 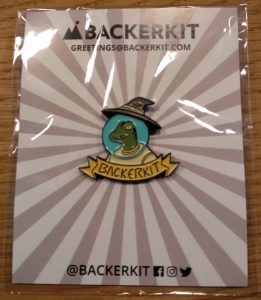 Publishing boardgames is quite capital-intensive, and for publishers who can’t (or won’t) float that capital (or take the risk!) there is of course Kickstarter. Backerkit is a website that allows backers to buy additional add-ons etcetera after a Kickstarter campaign concluded. They were at the fair with a stand, presumably to get into contact with prospective boardgame publishers. Obviously, I’m not their target audience, but if they offer up a free pin, I’m all about that! 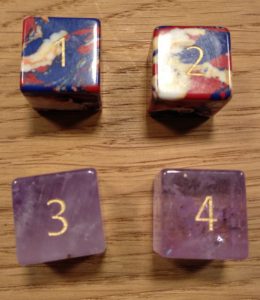 We got two pairs of gemstone dice from The Dice Shop Online. On top is a pair of fire turquoise dice, below is a pair of amethyst dice. The amethyst are especially nice, being semi-translucent. They catch the light beautifully. 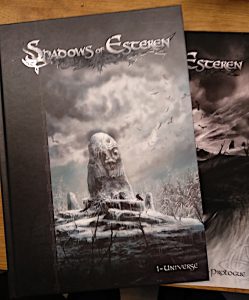 We came by the stand of the publisher of Shadows of Esteren, a dark-fantasy RPG. Normally, dark fantasy is not really my thing, but the books are really beautiful with great art and cartography. We got to talk with one of the writers (and stupidly enough I didn’t ask their name…) and they explained what their design goal was, how they went about it, what was in the different books etcetera. So I bought the main book and the ‘prologue’ (which contains three adventures), just for that and the beautiful books. 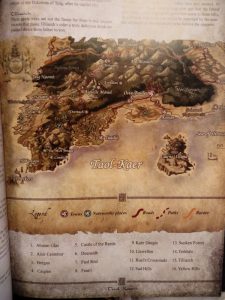 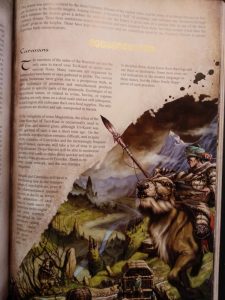 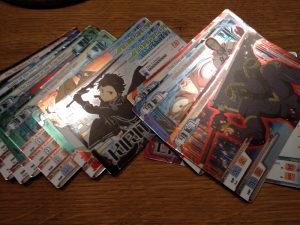 We went by the stand of Japanimation Games and saw the ‘boardgame’ for Sword Art Online. It’s like yahtzee in that you are trying to get certain combination, and the abilities of the characters help you to get the combos you need. It’s themed after scenes from the series, and it’s a nice little diversion. We got the ‘Special Edition’ with the foil cards. They also had acrylic standees of the characters as an extra, but that doubled the price and I thought it just wasn’t worth it… 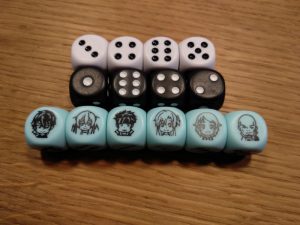 It comes with two sets of four ‘normal’ dice and a ‘character die’ for each of the six characters. Rolling their portrait allows for a ‘special move’.

The reason we went by the stand of Japanimation Games is that they publish games based on Robotech — and then the Macross part of that series. My love for the Macross franchise is well-documented, so it didn’t really have to think long before I also bought Robotech: Ace Pilot, also fun little dice game that doesn’t really have many deep mechanics.
I heard someone tell another visitor that a pallet of Attack on the SDF-1 had been delayed since it was fresh off the printers. They expected it in the next day — and it’s not even out in the US! So I was a bit bummed, but then I remembered that my friend was going on Friday, so I called him in the evening when we got back (at 20:00…) and gave him a few tips. He did manage to get the game for me, but don’t have it in my sweaty palms just yet. That’s just a matter of time, though.

Last year, we had dinner at the fair, but when I walked up to the food truck serving up hamburgers, I was told that they were completely sold out! There were other options, but we decided to just go back home and get something to eat there. We arrived at 20:00, again eleven hours after we left!

It’s always kind of exhausting: lots of walking, lots of simuli, but it’s always a lot of fun. We’re going next year, too.