A week ago, we were at the (unofficial) opening of the zendo at Zen.nl Veldhoven which is run by klik’s coach. It’s a really nice space: it used to be a showroom for a flooring store, so there were some nice floors in there, which certainly helps. I like going to events like that: they’re festive occasions, and the people are invariably nice.
They had a potted plant out in the kitchen area, and I really liked it. Turned out it was a Bambusa Ventricosa: when they get stressed for water, the stalks become thicker, creating little bulges in every segment of the stalk. That’s also why it’s also called “Buddha’s Belly Bamboo” (though those pot-bellied men you see are mostly Chinese gods of good fortune, not the Buddha). It had been pruned to be more like an indoor plant, with foliage on top of the stalks. I really liked it, and remarked about it to klik.
She visited a garden centre with her mother this week, and they had a plant just like that! They’re quite pricey though, but as it was 40% discounted, we decided that she would bring it home! We don’t really have a location for it yet, but that’s certainly a solvable problem! 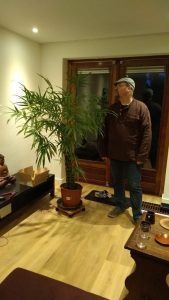